Transforming lives through the unique power of Shakespeare

Transforming lives through the unique power of Shakespeare

Since the pilot in 2009, Educape’s Shakespeare Schools Festival SA (SSF SA) has grown from 20 learners during the pilot performance to over 2000 youth across the country in the Western Province, Gauteng, Kwa-Zulu Natal, Eastern Cape and the Free State.

Since 2010, SSF SA has subsequently showcased 316 Shakespeare plays across South Africa, working with 6736 learners from 321 schools. We have built the capacity of 510 teachers as drama and performance arts directors.

Our values are a statement of intent. They embody the intuitive, energetic and ambitious way in which we work to fulfil our mission. SSF SA knows playing Shakespeare is not just fun, it can also be terrifying, hilarious and deeply moving. Everyone involved learns more about what it means to be human.

This is what our participants say about Shakespeare and the festival: 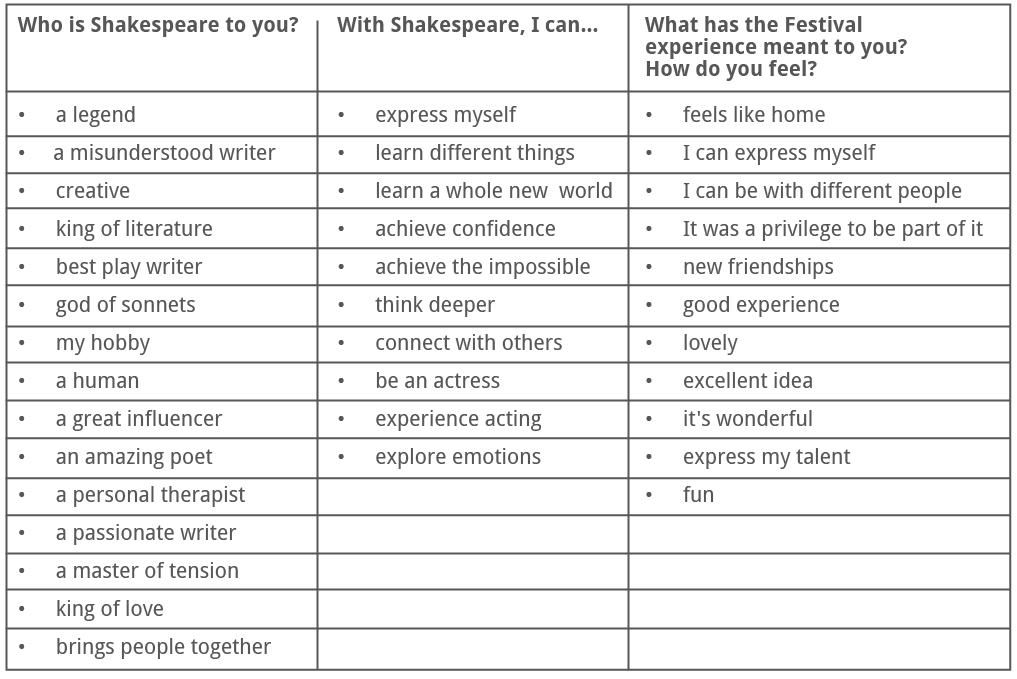 Every child should feel excited and optimistic about their future. Yet children today are worried, unsettled and lack the opportunities they need to succeed. Through working with SSF SA, their confidence soars, their ambitions grow and they develop skills that help them take to whichever stage they choose in life. The Festival’s ideal is to create an environment where learner’s voices are heard, acknowledged, encouraged, challenged and respected.

“The experience helped us grow in almost every aspect. From rehearsals to show time we never stopped growing. It made us realise the power of drama and how we could use it to carry messages across to society at large. Plus, now we know we ready for the big stage”
-Faatimah Divawalla, student – Darul Arqam Islamic High School, Cape Town

“This festival exemplifies what society has largely failed to do – it grows people positively: teaching them about themselves, others, acceptance and tolerance. As one of my Grade 11 learners said to me last night: “Thank you for letting us take part in the festival. I know we weren’t perfect, but I have never had so much fun!” Another one of the boys – who was very much an introvert – has come out of his shell. He has now performed in the festival twice and is unrecognisable in terms of how much he has grown in confidence and – more importantly – self-acceptance.”
-Tracy Kenyon, Teacher-Director – Graeme College, Makhanda Eastern Cape

Teachers report gaining value through SSF SA as an opportunity to develop skills in directing an ensemble of up to 30 students with varying abilities, whilst simultaneously providing practical experience in spoken English to students with English as a second or additional language.

“During the rehearsal process, there was a bigger cultural awareness of the time of Shakespeare amongst my cast and how that impacted and improved my learners vocabulary and frame of reference” – Este Scholtz, teacher-director De La Bat school for Deaf learners in Worcester

“Really appreciate the manner in which you handled our learners, boost their self-esteem and confidence. No words! For this wonderful opportunity for most of them being exposed to trauma and bad circumstances, now realise their own potential and abilities. With respect, I don’t think you realise the positive impact on our learners and their parents and especially us as teachers. We love you guys!” Lionel Phillips, teacher-director assistant – Victoria Park Primary school, Worcester

SSF SA opens theatres to new audiences, as we welcome many new parents as they support their children’s participation in the festival, for many it is for the very first time they would experience theatre. Because of SSF SA’s growing momentum, the Artscape Theatre has added the Festival to its Annual Calendar as part of their Audience and Development Programme. In Johannesburg, the Festival is part of the Youth Development Department at Joburg Theatre.  We continue our partnerships with the Playhouse Company in Durban since 2013, Rhodes University Theatre in Grahamstown and George Arts Theatre from 2015 and Baxter Theatre in Cape Town from 2014.

“I Attended the Shakespeare School Festival at the Baxter Theatre last night where, along with three other adaptations, Derek Daley directed the Pioneer School for the Visually Impaired’s half hour adaptation of Macbeth. I was on the edge of my seat throughout in much the same way as I feel watching trapeze artists especially when the cast ventured down the unnaturally high steps into the auditorium. I salute you Derek and cast, a great achievement!” Graham Weir, audience member Cape Town

The Festival provides a platform for equal opportunity where there are no boundaries for participation. When Vista Nova School joined SSF SA in 2011, children with cerebral palsy, physical disabilities and other barriers to learning experienced the thrills of the stage. Centre for Science and Technology (COSAT) in Khayelitsha participants showed exceptional courage by stepping out their comfort zones to explore themselves through the arts whilst surpassing their classmates in English during the period leading up to the Festival.  One of the major highlights of the 2018 season of SSF SA was debut participation of differently abled schools, which included De La Bat School for Deaf learners and Pioneer School for visually impaired from Worcester and Adelaide Tambo School for physically challenged learners in Johannesburg. We plan to reach out to more schools that are geared for learners with disabilities.

We continue making Shakespeare relevant in South Africa by encouraging the schools to explore ways of creating unique productions analysing of the current events, cultural representation of various communities, as well as translating scripts into African languages. Examples include Pantsula stand off from Imsebe Yelanga Arts Foundation in their version of Romeo and Juliet, and an isiZulu adaptation of Julius Caesar from Makhumbuzo High School in Durban in 2018. During the festival run in Cape Town in 2019, number of schools, including Leiden High School, Lalela Project, and The Untold Creatives, developed their plays in a translated version in Afrikaans and IsiXhosa.

“The kids understand the Shakespearean language better than me. I feel they are sponges and that is how they grasp the language, they just learn the lines and they come to rehearsals and shine” Wendy Fourie, Teacher-Director – Wynberg Boys’ Junior School, Cape Town